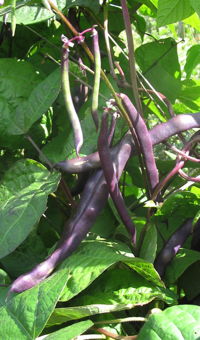 Especially attractive to pollinators = Varieties that, when planted, will attract and feed the pollinators in your community. Search for good pollinator varieties

Fedco Introduction = a variety introduced by Fedco followed by the year first offered.
PVP = Plant Variety Protected. Unauthorized propagation of the seed is prohibited. The use of PVP in the catalog is for informational purposes only and in no way constitutes an endorsement by Fedco of plant patenting.
AAS = All-America Selection. OSSI = Open Source Seed Initiative-pledged varieties. See the Four Seed Freedoms and OSSI website for more information.

Ω Independent Breeder— Varieties grown and supplied by the plant breeder. Independent plant breeders, continuing a long tradition of adapting varieties to local tastes and conditions, are the backbone of culture. For the most part eschewing plant patents, their work is their reward. Fedco is committed to buying seed from small breeders to give economic support to their work. Though we can find cheaper seed elsewhere, we prefer not to compromise on quality or ethics. Search for varieties from independent breeders

Breeder Royalties— For many years Fedco has been proactive in paying royalties to the current generation of ‘backyard breeders’ whose varieties we purchase from other sources. We recognize the value of their work and appreciate that they are keeping these seeds in the Commons, available to all. The label Breeder Royalties after a variety description indicates that we pay the independent breeder royalties because she or he is not receiving income from our purchase of the seed. Search for breeder royalties varieties

Indigenous Royalties— We pay royalties in recognition of the native breeders and Seed Keepers of the past, whose varieties have endured and continue to sustain us here on Turtle Island. We are indebted to those keen eyes, practiced hands and seed relationships, so often overlooked. Fedco’s catalog is rife with references to probable native provenances. We pay royalties for varieties that either hold a Wabanaki (from this bioregion) story or that have a tribal designation in the name. These royalties will go to the Nibezun Project here in Maine. Search for Indigenous Royalty varieties.

Black Benefit Sharing— When Black people were stolen out of Africa, torn asunder from their homelands and enslaved, they carried their seeds with them, to plant in new ground. Seeds: the memory and the culture of what was left and the hope of the future. Those plants became the basis of new food traditions in the Americas. But the enormous debt for such a purloined treasure has yet to be fully acknowledged or repaid. As a small step, we’ve designated about a dozen varieties that originate in Africa, or are part of Black foodways, for Black Benefit Sharing. 10% of the proceeds from the sale of these seeds will go to the Northeast Farmers of Color Land Trust for their work in helping farmers of color purchase their own farms. Search for Black Benefit Sharing varieties.

Supplier Codes: Know where your seed comes from! This unique Fedco feature provides information about the source(s) of each seed variety. Varieties with more than one supplier may have two or more codes. We code according to our best information at press time. When seed is short we must sometimes change suppliers later in the season. With notable exceptions, we generally choose varieties based on their merits rather than on our supplier preferences. We do not offer genetically engineered varieties, although we purchase from corporations engaged in genetic engineering. Use the supplier codes to help you make your own choices about whom you are supporting and which varieties are best for your garden or farm. Codes are as follows:

① Small seed farmers including Fedco staff.
② Family-owned companies or cooperatives, domestic and foreign.
③ Domestic and foreign corporations not part of a larger conglomerate.
④ Multinationals not to our knowledge engaged in genetic engineering.
⑤ Multinationals who are engaged in genetic engineering.
⑥ Syngenta, manufacturer of neonicotinoids.

Heldover Seed - Like most other seed merchants, we carry over stock from one year to the next, in any given season between 10–30% of offerings. We test all such lots for viability and discard any in doubt. We think you should know as much as possible about our seed. Heldover seed is not necessarily inferior to fresh seed; we have confidence in all lots we offer. We commission two-year productions of some varieties to decrease our growers’ costs, increase their efficiencies and improve their isolations.

Optimal Germination Guide - Sowing seeds at sub-optimal temperatures is the most common cause of failure. We include information in some footers about ideal germination temperatures, taken and extrapolated from tables in Knott’s Handbook for Vegetable Growers and The New Seed-Starters Handbook by Nancy Bubel.