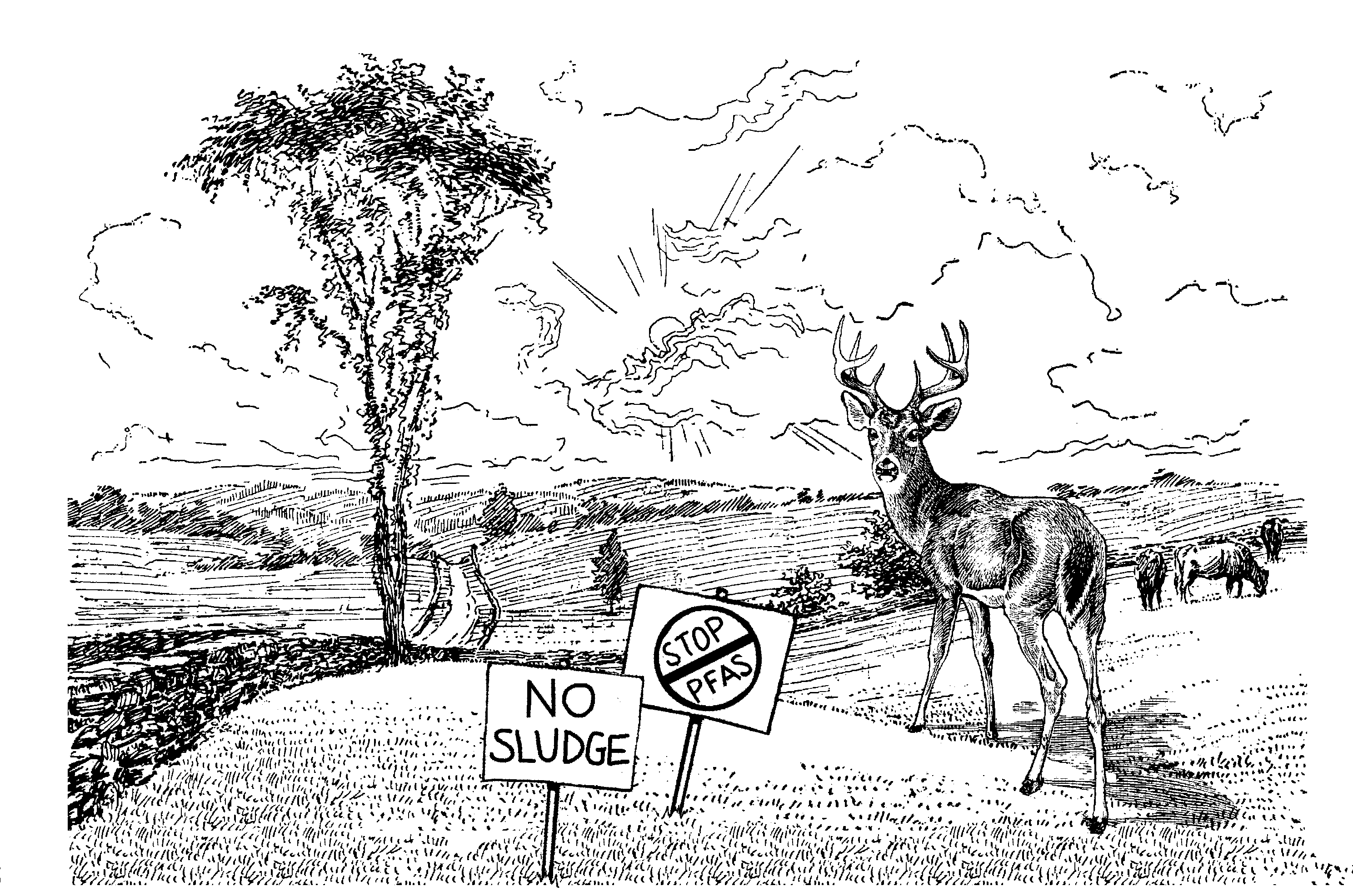 In fall 2021, the State of Maine issued a warning advising against eating venison from deer killed around the town of Fairfield because officials found high levels of PFAS in the meat. PFAS, which stands for Per- and Polyfluoroalkyl Substances, is a group of man-made chemicals that have been widely used since the 1940s for their ability to repel oil, grease, water and heat. Commonly known as “forever chemicals,” PFAS are found in many products like non-stick cookware, stain-resistant carpets and furniture, water-resistant clothing, heat-resistant paper/cardboard food packaging (like microwave popcorn bags and pizza boxes), and some personal care products. They break down at an extremely slow rate, making them persistent in the environment and causing them to build up in plants, animals and in us. They have been linked to decreased fertility, developmental effects in children, higher risk of certain types of cancer, suppressed immune systems, hormone interference and higher cholesterol levels.

The contamination problem turned out to be much more widespread than just deer in Fairfield. Starting in the 1990s, many farms in Maine spread municipal or industrial sludge—treated sewage—as fertilizer. The sludge was presented as a great option for farmers: a free way to use waste and add fertility to farmland. Unbeknown to most farmers then, the sludge contained high amounts of PFAS.

Many Maine farms—including Songbird Farm, which until recently grew seeds for Fedco—have begun voluntarily testing their well water, soil, crops, even their own blood, and many have received devastating results. In the case of Songbird Farm, levels of PFAS in drinking water and soil exceeded the state guidelines by orders of magnitude, and even more alarming, the levels of PFAS in their blood are orders of magnitude higher than in the average American. These affected farms have halted, or drastically altered production, and farmers are worried about the longterm health of their families.

In April 2022, Maine became the first state to ban the use of sewage sludge on farms and approved the creation of a $60 million fund to financially assist affected farmers. At this time, there is no universal cost-effective way to remove PFAS. Through rigorous testing, new infrastructure, and ingenuity, some farms have figured out how to farm safely again, but on farms like Songbird, the contamination is too widespread.

A recent report by the Environmental Working Group estimated at least 20 million acres of cropland across the country may be contaminated, yet Maine and Michigan are currently the only states routinely testing for PFAS contamination in sludge and on farms.

In late 2019 the EPA pledged under President Biden to take PFAS seriously, but in some ways it is too late. Regulators are moving too slowly, or moving in the wrong direction. Many states’ environmental officials have downplayed the detection of PFAS in sludge and on farms. In King William County, Virginia, officials are moving to expand the spread of PFAS-containing sludge on more than 5,400 acres. Officials in Alabama are increasing the amount of out-of-state sludge that’s imported and spread on fields, and in 2020 the state updated its biosolids rule to “encourage” the use of biosolids as fertilizer.

As far as we know, PFAS contamination risk in seeds is low. Plants don’t like toxic chemicals either, and have adapted ways to reduce their harm by taking toxins into their vacuoles and expelling them via their roots. If a seed does end up containing PFAS, there is an enormous dilution of the concentration from the seed to the adult plant.

That said, a lot of research still needs to be done on PFAS contamination in seeds. We are doing our best to educate ourselves and tap into the expertise of the plant ecologists who have done extensive eco-toxicology work with other chemicals, such as glyphosate. We are also looking into testing. As always, whether the news is good or bad, we will keep you informed of whatever we learn.