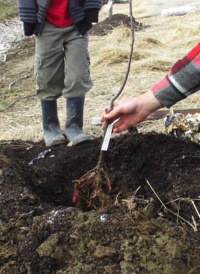 For most trees and shrubs: Prune dead or injured branches or roots. Further pruning of most trees is not necessary at planting time.
Nut trees: Do not prune tops, or prune or bend tap roots.
Conifers: Prune off 1/3 of the roots.
Roses: Prune roses back to 3 canes, 2–5" tall.

Avoid pruning young trees except to establish a basic shape, as it delays bearing. On apple and pear trees, leave the central leader alone and let it grow. It’s okay to cut off extra trunks and large branches. It’s okay to prune any branches that were broken during shipping. Always remove suckers or root shoots from fruit trees. On peaches and plums, the trees may want to develop 2–4 leaders, or an open-vase shape. Always prune just above a good strong bud that faces a direction you’d like your plant to grow.

Sometimes we need to prune a central leader in order to fit a tree into a shipping box; don’t worry—a new leader will grow from the topmost bud.

Standard and semi-dwarf (Bud 118 and M111) apple trees will almost always benefit from pruning when first planted, to establish the long-term basic shape for the tree. Then refrain from pruning until the tree begins to fruit. Every time you prune potential leaf-bearing branches from a young tree, you set it back. The tree will grow quickly and fruit sooner if you allow it to maximize photosynthesis. Once it begins to fruit, then you prune it annually.

Once your fruit tree begins to bear you will want to prune annually. Good pruning brings sunlight to all parts of your tree. Maximum sunlight encourages more and higher-quality fruit. Sunlight also encourages fruit buds to form for next year’s crop. A well-pruned tree will produce larger fruit and will tend toward more annual bearing. Good pruning discourages fungal diseases and promotes greater spray penetration. There’s an old saying that a bird should be able to fly through your fruit tree.

Most pruning should be done in late winter or early spring. We recommend a good-quality pair of hand shears and a lightweight pruning saw. You may also wish to invest in long-handled loppers, a pole pruner or a pole saw. Keep your pruning tools sharp for smooth, clean cuts.

Any good book on growing fruit trees will have the information you need. Consult old and new books as well as orcharding articles and develop a system that works for you. Pruning is not difficult and will make a huge difference.

Fruit is produced on vigorous one-year shoots off healthy canes. As canes age they become twiggy and less productive. Begin pruning after three years. Head back long pieces of new growth for a bushier plant. Cut out weak or dead canes and dead tips. Each bush should be allowed to grow 6–10 canes varying in age from 1–6 years old. Thereafter, remove dead canes and those over 6 years old and encourage new replacement canes. Bushes with regular moderate pruning produce the most berries.

Grapes require annual pruning and a trellis or arbor, though in Italy they still sometimes grow them in maple trees. All systems for growing grapes involve removal of most growth in spring or late fall to encourage new canes, as fruit is produced on these canes. There are many systems for training grapes. Some are suited to laying down and covering tender varieties over winter. Any good book on grape growing will show you several options. We suggest the Hudson River Umbrella or the Four-arm Kniffin system. The University of Maine offers a series of videos demonstrating different grape-training techniques. 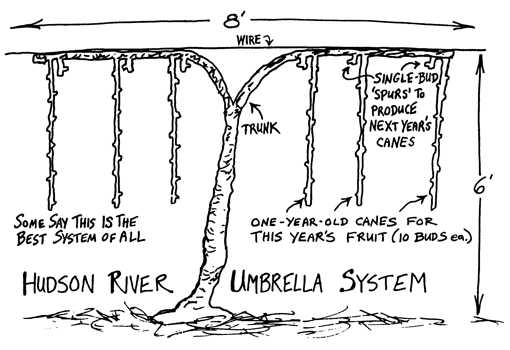 Growing Grapes on an Arbor Train one or more vines onto an arbor or gazebo; we have 8 vines, spaced about 10' apart. Prune each vine back to a single trunk. Encourage several permanent arms from each trunk. Every winter remove 70-90% of the the past summer’s growth. Next summer new fruiting canes will grow off the permanent arms. 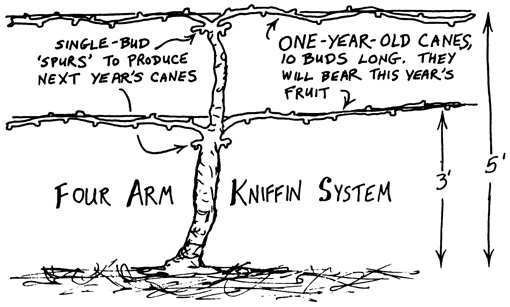 On a trellis: Train a single trunk to the trellis wires and then train two permanent 7–10' cordons (arms) off the trunk. Each winter remove at least 70% of old growth, leaving a dozen or so one-year-old laterals. That year’s fruit will develop on fruit spurs growing off these one-year-old canes (laterals).

Summer pruning may be required to keep extremely rampant vines from choking out your farm.

On an arbor or gazebo: Once established, prune 70% of the old growth each year and leave some new canes for this year’s fruiting. 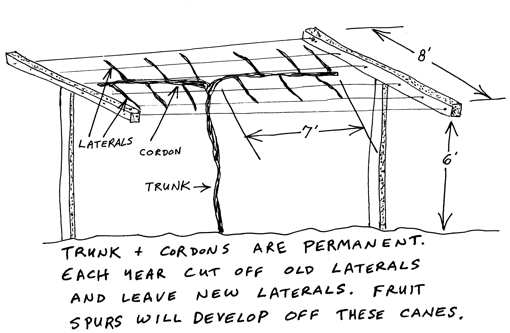 To make evergreens dense and compact, remove the central leader and the center bud on the end of each side branch.

Shrub roses and climbers will require little pruning in later years. Any pruning should wait until after the forsythia blooms. Remove dead or broken branches, and periodically cut out the oldest wood.

Prune right after flowering. Late-season pruning removes next year’s buds. As the plant matures, prune off a quarter of the new suckers and the oldest growth (a few main stems each year). Some growers prefer to keep the plant low and bushy. Do so by “topping” it off every year: prune any upright branch back to a junction with a lower branch. Others prefer a tall tree-like form; remove the lower branches. Lilacs are more than willing to cater to your own personal vision. Have fun! No need to cut off spent flowers except for appearance.

Summer-Flowering Shrubs should be pruned in late winter or early spring, before the new wood begins to grow. These shrubs blossom on the new wood they produce in the spring.
Spring-Flowering Shrubs form flower buds in the summer, after they are finished blooming. Prune them immediately after their bloom is over. If you wait and prune them in the winter or following spring, you will likely remove many flowering buds.

A common error is to prune or shear shrubs straight across the top. This encourages top-growth and the lower part of the shrub becomes woody and unsightly with less foliage. Proper pruning promotes growth at the base of the shrub.

Observe your plants and see what they need. Some shrubs benefit from aggressive pruning each year and might even respond well to being cut all the way back to the ground; others will respond by delaying fruit or blossom. Some plants thrive with little or no pruning.

Overgrown shrubs with little foliage near the base may be rejuvenated by cutting canes down to the ground in early March, even though early blooms may be sacrificed that year. They will send forth new shoots in late spring and will be bushy with foliage clear to the ground. Pinch off tops when the desired height is attained. It usually takes two to three years to rejuvenate shrubs and hedges completely.

Pruning Clematis: It’s not as hard as you think!

If you have a clematis that is bare at the base with a bushy clump of flowers at the top, try pruning it according to the Group 3 method. Your plant will develop foliage from top to bottom and the flowers will spread themselves out more evenly.