Skip to main content
Ordering will resume for Fedco Trees when we release our 2023 catalog, in early October 2022. 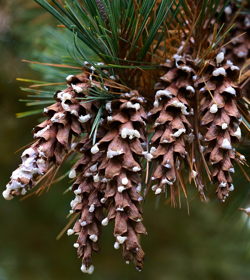 Folks are always asking for my White Pine Syrup recipe. I always tell them it’s a waiting game. A practice in patience. The first time I made it was a process of discovery. I had no recipe to follow and didn’t measure a thing. Some of the best recipes come from reckless abandon in the kitchen.

At the height of summer, Eastern White Pines start to drop their beautiful green cones all over the ground. One summer while wandering through my favorite patch of pines I picked up 6 or 7 of the sticky cones and brought them home to make a tincture. I sliced them lengthwise and popped them into a pint jar and doused them with vodka and put them in a cool dark place and waited.

September is the best time to find local honey. I bought a pint from a friend and infused it with slices of fresh ginger root and set it in a cool dark place and waited.

By the time October rolled around it was time to make root tincture from my echinacea patch. I made about pint of that and set it aside in a cool dark place and waited.

Before I knew it February was upon me and I had a cough that was keeping me up at night. So one sunny afternoon I bundled up and wandered through the neighbor’s fields and woods in search of white pine bark. There was a single pasture pine in the center of the field—glorious in its nature—perfectly built for climbing. I climbed up about midway and noticed some old wounds on the trunk where patches of sap had worked their way through and aged in the elements. I had an empty tin in my pocket and a handy jack knife so I scraped the sticky goo off the trunk and into the tin, snapped it shut and stuck it in my pocket.

On the way down from the tree I carefully removed a small amount of bark from a damaged limb and a handful of needles from the end of the branch. Off I went to make some syrup.

Back at the house I pawed through my cupboard and found the jar of echinacea and the tinctured pine cones. In a kettle I combined the pine bark and needles with some water and simmered it for 20 minutes or so then pulled it off the heat to let it cool. Once it cooled I removed the bark.

I scraped the pine pitch out of the tin and gently heated it in a separate pot until it melted just enough for me to pull out any pieces of dirt and detritus. I pulled it off the heat and poured the pine bark liquid onto the pitch and stirred it up and set it aside to cool. I then added some echinacea tincture and some of the mysterious pine-cone tincture followed by enough of the gingered honey to make a nice syrupy consistency. The waiting was over!

I got out a shot glass and settled in by the fire for a little nip. It was delicious! That night my cough became more productive and by the next day I was feeling a lot better but had developed a new problem. The syrup was so delicious that my roommates managed to polish it off by the end of the weekend!