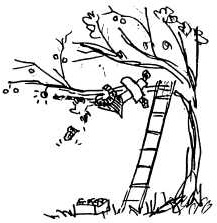 On May 11, 2015, two months shy of 100 years old, Francis Wendell Fenton passed away in the same room where he was born on the Sandy River Road in Mercer, ME. Very likely America’s oldest orchardist, he was out spraying his trees just a couple of days before he died. Not only was he Maine’s senior orchardist, he also had one of Maine’s largest apple collections. He was a man with a great deal of knowledge, an infectious love of life, a wonderful sense of humor, tremendous generosity and a passion for apples and people. He attributed his longevity to his daily lunch of hot applesauce and ice cream.

Francis’s father planted the orchard in 1906. Of the original trees, about 40 remain. These include a Mac, a Pewaukee, a Ben Davis and about 30 Wealthys. Francis left Maine for California at 22 and when he returned home for good in 1972, the orchard was grown up to white pine and the old farm house had all but collapsed. He renovated the house and the barns. He cut the pine out of the orchard and rescued as many of the old trees as he could. He then filled in the gaps with young whips, many of which he grafted using scionwood from the ancient trees on surrounding farms. By the time he was 99 he had 400 apple trees of more than 40 varieties and an assortment of pears, plums and other fruits.

My first memory of Francis was from one of the early Common Ground Fairs in Windsor. He was standing beside an apple display he had created by stabbing 20 heirloom apples onto nails protruding from a large upright sheet of plywood. He talked to fairgoers all day. Francis loved to talk and to teach. He reminded me of an old-time hawker at a sideshow. When Francis stopped going to the Fair, I decided it was time to take up the torch and create a Fedco apple display. That was when I tracked him down in Mercer and our friendship began. For the next 20 years I visited his Sandy River Orchard many times. I collected apples to display and scionwood to graft. He and I walked the orchard together over and over and over again. When he was no longer confident of his own grafting ability, I grafted for him.

For a number of years he would appear at the Fedco spring Tree Sale. We would give him a name tag and make him an honorary employee for the day. He would hold court and sell trees. Customers loved him. He never stopped planting trees himself either. One year, when he was about 95, he was standing in line holding a tree he intended to purchase. As I walked by, I heard him say to the stranger next to him, “I always wanted a Red Astrichan.”

Although Francis slowed down somewhat in in his later years, nearly every time we visited he was out in the orchard mowing between the rows or picking fruit or conversing with another customer who stopped by the farmstand to purchase a peck of Wealthys or Wolf Rivers or his famous Dollie’s Delicious. If not in the orchard, he’d be puttering around the barns with his chainsaw. There was Francis, late 90s, working on some project.

Francis’s favorite apple was Wealthy. He always said it was the best there was. His 109-year-old standard Wealthy trees are still putting out large crops of beautiful fruit. Not only that, the trees themselves never seem to get too big, even on old-fashioned standard seedling rootstock. Wealthy is exceptionally hardy and prolific, truly an all-purpose fruit. It makes a fabulous pie and wonderful hot applesauce, especially with ice cream.

A long-term plan for Sandy River Orchard is being developed by his close relatives. It will remain in the family and continue to operate. Right now a young couple who got to know Francis the last few years is managing the orchard. They planted a new row of young trees this spring. Another generation takes up the grafting knife and the ladder and the picking bucket and continues the journey.
—John Bunker

Jean has been growing plants for Fedco for more than twenty years. She is our main willow supplier and propagates all her plants from cuttings. Jean tells us that she still gets a thrill from seeing new roots emerge from a cutting. In addition to growing woodies for our catalog, she is an avid vegetable, herb and small fruits gardener, grows organic cut-your-own Christmas trees and loves mowing with her scythe. Jean is an adjunct instructor at Unity College, editor of MOFGA’s quarterly newspaper, and somehow she also has time to serve on several local committees.

“In 2011 we began growing perennial plants for Fedco Trees. Though primarily an organic Community Supported Agriculture vegetable farm, we have a passion for propagating as many species of perennial flowers and herbs as possible—specializing in multi-purpose perennials that combine edible, medicinal, cut flower, and beneficial insect habitat functions in their landscape, and have discovered several gems from little known native perennial species.”

In 1995 Delton Curtis began grafting fruit trees for Fedco and has delivered tens of thousands of plants to us since then. Most likely, no matter where you are in the country, you know someone who knows someone who has one of his trees. Over the years, he has taught many grafting workshops for MOFGA’s orcharding workshop series. Crabapples are Delton’s specialty. His collection contains more than 150 varieties, possibly the most extensive in the state. Along with his wife Becky, Delton maintains several large gardens, an orchard and five ponds. Drop in on a summer day and you’re likely to find him puttering around on his tractor and Becky canning the most recent delicious harvest of the season.

Since 1985, John Meader has provided us with many wonderful plants for our catalog, including the ‘Goodbarn’ elderberry. Recently, we asked John if certain plants were dearer to him than others. He replied, “I like cranberries and blueberries because they’re so tough. They handle very acid soils, excess water and long hot dry spells. I’ve also worked with raspberries, grapes, elderberries, beach plums and mulberries. I don’t feel I understand these all that well. It takes years of living with a plant species, and then you still get fooled, or pleasantly surprised, which is the reward: learning. Plus, of course, the fruit to eat.” If you come to our annual Tree Sale, you’ll find John among the blueberry plants fielding questions from the crowd. And yes, he is related to the ‘Meader’ highbush blueberry, selected by his father, the late Professor Elwyn Meader.