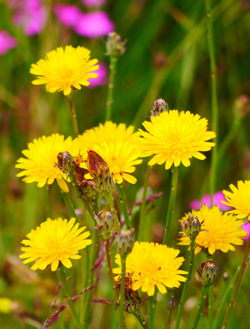 I read an article in the New York Times, “Invader Batters Rural America, Shrugging off Herbicides,” Aug 11, 2014, about a weed that is just about impossible to kill establishing itself in fields planted with Roundup Ready crops. “Botanists call the weed palmer amaranth. But perhaps the most fitting, if less known, name is carelessweed. In barely a decade, it has devastated Southern cotton farms and is poised to wreak havoc in the Midwest—all because farmers got careless.” Searching “Roundup resistant weeds” at the Times website turned up articles going back more than ten years connecting the planting of Roundup Ready crops to the evolution of Roundup-resistant weeds. Darwin was right: evolution is fact, not theory, and “survival of the fittest” is the law of the corn field. The article quotes the farmer in whose fields palmer established dominance: “I consider myself a Roundup baby, and it was great. You didn’t have to think about anything. And now we get this weed that flips everything on its head.”

The obvious response to this complaint is “Well! Duh!” To say you didn’t have to think about anything is to imagine your actions have no consequences, that someone else has worked it all out for you, that the corporations that sold you the seed and the pesticide had nothing but your best interests at heart, that you owe the land nothing but contempt.


In response to the rapid spread of carelessweed and myriad other plants evolving to resist Roundup, Big Ag is reaching back into its bag of ever more toxic chemicals, the ones Roundup was supposed to be so much better than, and is now urging farmers to start applying these toxins and to plant a new generation of seeds engineered to resist them. The EPA, once again abandoning its responsibility for our safety and to sound agriculture, approved the planting of these new chimerae. The article quotes Dave Mortensen, a plant ecologist from Penn State, who makes the all-too-obvious point that the companies are repeating history, only now plants will develop resistance to stronger, more damaging pesticides. Dr Mortensen points out there are natural solutions like planting cover crops that would be more effective and better for everyone concerned except the Ag businesses’ bottom line. But let the farmer have the last word: “I’m not stupid. I know you can only ride a pony so far. It’ll probably take another 10 years before palmer becomes a real big problem again. But that just bought me 10 years I didn’t have.” How much more time could he buy if he thought about how to farm instead of thoughtlessly heeding the blandishments of big Ag?

If I have learned anything over these years, it is that I have to think about everything. What I’ve learned from my colleagues and customers is that’s the nature of farming as well.