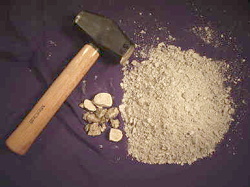 Although elements such as calcium, potassium, phosphorus and silicon may be abundant in our soils and in the fertilizers we apply, they may not be present in a form that does the plants any good. To be of use, these essential elements must be freed from the compounds in which they are locked, to circulate in the soil as positively charged ions, called cations.

Unlocking the elements begins with the mechanical breakdown of rock, as water enters rocks and, through repeated freezing and thawing, breaks the rocks down to smaller and smaller particles. The unlocking continues with chemical breakdown by acids in the soil and in the digestive tracts of animals.

Once released, the cations can be taken up by the roots of plants or float around the soil, constantly on the lookout for negatively charged ions, or anions, which hang out on the surface of clay and humus particles. The presence of these negatively charged particles in the soil and their ability to attract and hold the positively charged particles is what is measured by the soil’s cation exchange capacity, or CEC. The higher the CEC, the more likely there will be some kind of hookup. Clay particles, because they are so small, have a very high ratio of surface area to volume and provide a lot of space for these connections to be made.

When the hookup has been made, the cation and anion are in a relatively stable but easily breakable form.

In a biologically active soil, respiration by the denizens of the dark—the plant roots, the microorganisms, the earthworms—releases carbon dioxide, which combines with water in the soil to produce carbonic acid and free hydrogen ions. Hooking up with anions more readily than other cations in the crowd, these hydrogen ions displace the cations of the essential elements, freeing them to be taken up by the roots of plants, becoming part and parcel of the plants’ structures.