Skip to main content
Ordering will resume for Potatoes, Onions and Exotics when we release our 2023 catalog, in late November 2022.

Both Ginger and turmeric will arrive as a large rhizome (or "hand") with several smaller rhizomes ("fingers") attached, and should be separated into smaller pieces before planting.

How to cut ginger: Using a sharp knife that has been sterilized in high-proof alcohol between cuts, cut your ginger into pieces that are roughly 1–2oz or 2–3". We recommend cutting each finger at the narrow base about 1/4" above where it connects to the main rhizome, leaving a tiny stump behind. This extra piece accounts for shrinkage as the cut surface dries, and will prevent sunken areas. Place the cut pieces on a rack with good airflow for about 5 days until the cut areas dry down and cure, and then begin the sprouting process as below.

How to cut turmeric: Turmeric needs less processing than ginger, just snap a few of the larger fingers off, leaving any smaller ones (less than ~1") attached to the main root.

If you can’t begin sprouting your seed immediately, rhizomes can be stored at above 65° for several weeks. Definitely start sprouting by mid-April. To sprout your ginger or turmeric stock, spread 3" of good potting soil in a crate or other well-drained container, arrange the rhizomes on top so they aren’t touching, and add soil to cover by a few inches. Our seed ginger will need to be cut into planting-sized pieces; for turmeric, snap off some of the larger “fingers” and plant the main rhizome with a few of the smaller “fingers” still attached. Nutrient-rich potting soil such as Vermont Compost Fort Vee gives them a great head start. 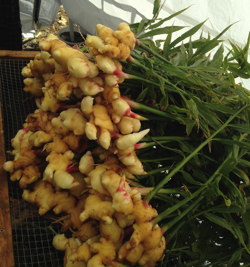 Keep the soil in your bedded-down crate of ginger or turmeric rhizomes at 80° with a heat mat or in a heated greenhouse. Direct sunlight is helpful, and the heat is crucial. Go light on the watering; especially before sprouts appear, the rhizomes won’t take much water. Only when the soil is dry to the touch should you sprinkle it lightly. Ginger and Turmeric are sensitive to overwatering at this stage, but most sprouting failures are due to low or fluctuating temperatures.

In New England and New York, we don’t recommend trying this outside of hoophouses or under other cover. After the last frost, or in early to mid-June, when hoophouse soil temps are above 60°, dig a 6"-deep trench down the center of a 4'-wide bed. Fertilize well with the nutrients your soil demands—ginger and turmeric are hungry crops, so you may need to sidedress. Plant out sprouted seed 5" apart and cover with several inches of soil. Water in.

Hill soil over the crown of the plant where rhizomes begin to show pink. Hand-weed. Water lightly before foliage is established. Once your ginger has recovered from transplant shock, and especially in the hotter days of July and August, water often and liberally.

Harvest as late as possible before freezing to achieve the greatest yield. For chunky rhizomes, wait until mid-October to dislodge the huge clusters from your hoophouse soil. We’ve found that bagging baby ginger in ¼- or ½-lb bags is the easiest way to get a fair price for this special item.